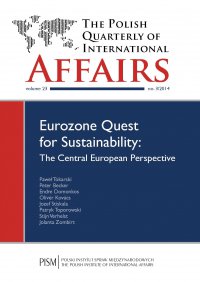 The Polish Quarterly of International Affairs 3/2014

The autumn 2014 brings widespread fear that the crisis in the eurozone may reescalate. A truism is to say that its main drawbacks have not been solved. The problems with the banking sector in the EU are far from solved and the need to clean up bank balance sheets. The necessary process of private sector deleveraging will continue to have an adverse effect on economic activity. The public finances of several eurozone economies are in poor condition. In three out of four of the largest eurozone economies, the general government gross debt-to-GDP ratio is increasing. Several Member States still face considerable structural challenges and the sustainability of economic models will have to be reconsidered, not only in countries such as Greece, Cyprus, Spain, Italy or France but also in Finland. After Standard & Poor’s stripped Finland of its triple “A” rating in October 2014, the only members of this exclusive club in the eurozone remained Germany and Luxembourg.

What is needed mostly is to stabilise economies and to improve economic policy coordination in the EU. Not only do the Member States have to get their budgets in order, they also have to reform their national economies so that they become competitive again. However, this should not become a decision between austerity versus growth or between demand-side versus supply-side economics. It is obvious that Europe needs both, along with sustainable fiscal policies of all Member States, which goes hand in hand with incentives for sustainable growth. Almost all European economies need structural reforms to strengthen their growth potential, to recover domestic demand and to make labour markets more robust. The task for European policy is, hence, to develop real European economic policy reform to tackle weaknesses in some economies, to generate growth, to create more and better jobs, and finally to guarantee the coherence of the European Union as a whole and the democratic legitimacy of these reform measures.

The objective of this essay is to analyse the position of the Hungarian government towards the banking union. In order to better understand the official standpoint of the cabinet, it is necessary to make a brief overview related to the possible introduction of the euro in Hungary. As far as the country’s preparedness for the adoption of the euro is concerned, several internal factors (fulfilment of the Maastricht convergence criteria, pursuance of credible and responsible economic policy that promote sustainable economic growth and macroeconomic stability, etc.) and external ones (the structural problems of some eurozone countries and the extended and modified rules of the Stability and Growth Pact and the Euro Plus Pact) have to be taken into account if a responsible decision about accession to the eurozone is to be taken. Only with wide consensus between the participants in the country’s economy and society and considered, balanced economic policy can Hungary reap the possible benefits of the adoption of the common currency.

This paper attempts to contribute to a better understanding of why a more systemic approach is needed when it comes to Hungary's eurozone accession. This study first dwells on the issue of its macroeconomic instability from a regional perspective by devoting attention to its "lagging" phenomenon, which requires a more holistic approach in supporting Hungary's eurozone accession process. Then it broadens the research canvas by emphasising that the challenges Hungary is facing today imply that the role of governance and the quality of the state are heavily appreciating. It argues that a prerequisite of eurozone accession is governance that is engaged in fostering public sector innovation in addressing old and new challenges with supporting sustained growth and development.

The objective of this paper is to clarify the real impact of the TARGET 2 imbalances that emerged for the eurozone as a whole and reveal its consequences for the National Bank of Slovakia. The main aim of this study is to try to finally close the discussion among well-known European economists about the real effects of disproportional flows of funds (in central bank money) between eurozone states. Opinions on this issue have been amended a few times and we should first make clear whether rising TARGET balances are accompanied by increasing risk for the stability of the monetary union. We understand the term “risk” to mean the prospect of loss. After introductory remarks on the fundamentals of payment settlement via a correspondent bank and via a payment system, we will review the conclusions of specialists discussing the problem of payments. These diverse outcomes also motivated the author to exhaustively specify the risks to the eurozone as well as the National Bank of Slovakia. That is why we analyse the fundamentals of payments in the first place. After closing the debate with a prospective loss analysis, we dismantle the real implications of imbalanced payments, evaluating the experience of the National Bank of Slovakia.

This paper addresses the issue of building competitiveness through implementing the European Semester’s country specific recommendations (CSRs) in the V4 countries (Czech Republic, Hungary, Poland and Slovakia) and the southern eurozone states (Portugal, Spain and Italy). As far as the V4 are concerned, they experienced large and persistent external imbalances (i.e., measured by the magnitude of the balance of payments deficit) until the beginning of the crisis, as with the Mediterranean EU Member States. This points at some similar structural problems that affect their competitiveness. Later, among the V4, the imbalances were in Poland and Czech Republic only.

Jolanta Zombirt
Banking Union: An Effective Instrument for the Eurozone Banking Sector or a Useful Distraction from Other Issues?

The ongoing review performed by European institutions with closer and closer cooperation with Member States since the beginning of the crisis has revealed that nowadays, with globalisation and the greater presence of trans-border banks, such a situation can jeopardise not only the process of economic integration and the completion of the single market for financial services but also, according to the directive, “continuation of the critical functions of institutions and the preservation of financial stability.” It can also threaten confidence in the European financial markets and financial players, which in turn could bring unintended consequences for economic growth. From political and economic points of view, such a situation could no longer be accepted. Therefore, politicians and economists, having been accused of doing nothing by European taxpayers bearing the huge costs of numerous rescue packages granted to failing banks, had to find a solution.