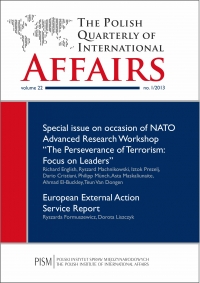 The Polish Quarterly of International Affairs 1/2013

A Note from the Editors
Richard English
Introduction
Ann-Sophie Hemmingsen
Making a Case for Going to Court: Militant Islamism in Denmark

This article argues that there is potential in adopting a strategy of targeting such individuals for legal prosecution but not necessarily under terrorism legislation. It argues that an approach relying on pretextual prosecutions could be effective and possibly have fewer counterproductive side effects than prosecutions under terrorism legislation. This is done by first drawing a picture of the militant Islamist environment in Denmark and secondly suggesting a path for implementing such a strategy, introducing the challenges and potential pitfalls associated with it.

Leadership decapitation is a part of the counter-terrorism strategy which can be successful if undertaken under certain conditions. On the one side decapitation tactic required very specific amount of resources instead invest in others counter-terrorism measures. But on the other side it can bring “boomerang effect” while the aim of reduce capabilities of the terrorist group can be achieve also by different methods, like pitting one group faction against other. Despite arguments for and against targeted killing, it should be taken as one of a broader set of counter-terrorist measures and should include local authorities. Despite all the most effective strategy combating terrorism seems to be prevent it on different stages before it turn into real threat for the state security.

The effective combating of contemporary terrorism requires a great deal of international cooperation and the employment of various methods and strategies. The European Union is pushing forward for a comprehensive, harmonised joint European policy on counter-terrorist measures. Croatia plays and will continue to play a small, yet important role, because it is the only NATO member that has had recent experience with a defensive war. Also, it is a gateway country that can serve as a bridge between the West and the East and thus help battle terrorism by providing expertise and understanding of the Islamic culture with which it has close contact through Bosnia and Herzegovina.

There is no consent in the literature as to whether targeting leaders is effective, although all researchers agree that in no way it is a magic bullet that would solve the problem of terrorism. It could be effective as an operational component within a broader counter-terrorism strategy rather than as a single instrument. It is also indispensable to bear in mind the normative and moral contexts. Using a combination of measures and strengthening the law enforcement elements of counter-strategies are therefore recommended.

Ryszard Machnikowski
Terrorist Leadership—to Kill or Not to Kill

It seems that we are never in a position to be absolutely sure that a terrorist entity truly deserves to be ignored without paying a high price if our assessment ultimately proves to be wrong. By ignoring the problem we are providing prospective terrorists with time to grow and develop deadlier skills—this is probably the worst option and is not worth trying. We should study each event of political extremism patiently and stubbornly and try to prevent the moment it crosses the line between legitimate political activism, however unpleasant it may seem, to illegitimate violence.

This paper argues that counter-terrorism communities need to incorporate the second and third order effects of their pre-emptive actions into their planned actions, and adopt a broader human security approach which will bring long-term sustainable security. Democratic states should be more careful with their policy of offensive counter-terrorism (especially targeted killings) in order to prevent further boomerang effects, resurrection of the eliminated terrorist nodes, and damage to democratic values.

To claim that calculated actors (i.e., the counter-terrorist decision-makers), interested as they are in securing the indirect goal of political stability, will kill (or capture) terrorist leaders when they are in a position to do so, and with good results in terms of terrorist group mortality, may be a double tautology. This is presented as the puzzle of terrorism decapitation research: the paradox of doubts about the utility of something that may be seen as guaranteed to work.

Dario Cristiani
Focus on Leaders? Insights from the Algerian Experience

The Algerian experience shows that fighting terrorism and extremism requires a plurality of instruments rather than a simple focus on a single instrument, as this kind of threat is intrinsically multifaceted and multidimensional. In this wider framework, focusing on leaders is only one aspect among many others, although symbolically it may bear rather strong importance in the process of defeating the enemy.

Asta Maskaliunaitë
Leaders Make History, but They Do Not Make It as They Please

The leaders of terrorist organisations should not be completely ignored, but engaging them has to be part of a larger comprehensive strategy. The essence of this strategy should focus on the reduction of the organisations’ capabilities to inflict damage, limit the appeal of violent means in its constituency and the denial of recruitment to it. The latter can well be the consequence of the former two, though that is not always the case.

Ahmad El-Buckley
Preserving the Pied Piper: The Importance of Leadership in Deradicalisation

This article argues that while proponents of decapitation and targeted killings of terrorist leaders advance logically sound arguments, empirical studies have often shown that these arguments do not take hold in reality. The article then draws on the Egyptian experience with the deradicalisation of Islamist militant groups to claim that capturing rather than eliminating certain types of leaders can have a substantial impact on efforts to reform weakly committed foot-soldiers of terrorist organisations and non-violent sympathisers, which should be at the heart of all long-term counter-terrorism strategies.

Teun Van Dongen
Terrorist Leadership Elimination: When to Do It?

It is true that there have been attempts to find explanations for the effectiveness of leadership eliminations, but those have been largely focused on easily observable and only indirectly relevant factors such as ideology and the age of terrorist groups. Organisational structure has been considered as well, but with little success. In a modest attempt to make up for this gap, the remainder of this article outlines two fairly intuitive policy recommendations regarding terrorist leadership elimination. They are intended to help policy makers decide when—and when not—to try this strategy.

Eman Ragab
Targeting Leaders as a Strategy for Countering Terrorism: The Egyptian Case

Egypt’s experience in countering terrorism, examined in this article, reveals that countering terrorism requires complex strategies, relying not only on targeting leaders. Besides, the efforts of America during the Bush administration, in cooperation with several countries in the Middle East, did not lead to the end of terrorism, but instead new patterns of terrorism were created and overlapped with organised crime, making it more complex.

This paper will analyse possible options for a state to engage the leadership of terrorist, insurgent and organised crime networks, and possible legal, military and political consequences of such engagement. However, the main argument of this paper is that every single case of engagement of such leadership is unique and requires highly individually tailored approaches by state institutions.

The purpose of this analysis is to provide an exploratory view of terrorist attacks by females in order to identify repeatability in which countries, the types of weapons used and the nature of the target and number of casualties, and whether a group or individual was responsible.

The aim of this article is to give an overview of the European External Action Service (EEAS) staffing policy to date as a result of the interaction between its regulations, recruitment practices, the service’s hybrid structure and its expectations towards its performance/deliverables.