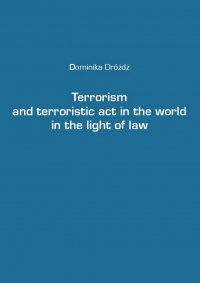 The purpose of this monograph is to consider the terms “terrorism” and “terrorist act” from the point of view of mainly legal sciences. This study takes into account selected legal acts on terrorism, including the prohibition of terrorism in India, the United Kingdom, the United States and Poland. Attempts were made to define terrorism for the Statute of the International Criminal Court. The project of act of terrorism and the activities of international criminal tribunals including terrorist act were also presented. This subject ends witha proposal for the definition of terrorism.