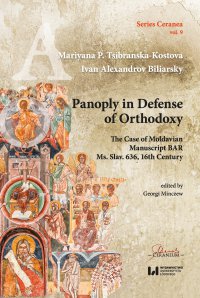 The monograph is dedicated to the Slavic manuscript BAR Ms. Slav. 636 from the Library of the Romanian Academy in Bucharest, compiled in the Principality of Moldavia in 1557 during the reign of the Moldavian ruler Alexandru Lăpuşneanu (1552-1561; 1564-1568) and under the Suceava Metropolitan Gregory II, written by the hand of Hierodeacon Hilarion, in all probability in the Neamt Monastery. The manuscript is an occasion for the study of a cultural phenomenon related to faith, law and literature, characteristic of the two Romanian principalities, where during the Late Middle Ages a special synthesis of the literary heritage bequeathed by the South Slavs. The manuscript is a collection with mixed content of anthological sort, type of monastic encyclopaedia, with an unusually rich combination of texts of different genres and themes: legal, dogmatic, polemical, chronicle, apocryphal, and others. The aim of the authors is to study and publish the individual texts from the collection, revealing the overall message of the manuscript as a real verbal armament, a real spiritual sword in the fight against heresies for the salvation of human souls.

Part one. The Slavic Manuscript BAR Ms. Slav. 636 in the Library of the Romanian Academy in Bucharest. General Characteristics 13

Part two. The Law Section of the Manuscript. The Nomocanon of Slavia Orthodoxa. On the Two Sides of the Danube in the 16th Century and Manuscript BAR Ms. Slav. 636 47

Part three. The Manuscript Part Devoted to Doctrine and Controversy 81

Chapter I. Encyclical Letter of the Three Patriarchs regarding the Consequences of the Florentine Union 83

Chapter I. Lists of Patriarchs 147

Chapter I. General Remarks on the Apocrypha Contained in the Collection 211

Chapter III. Ukaz [Tale] How God Created the Brotherhood of the Cross 249

Instead of a Conclusion 267