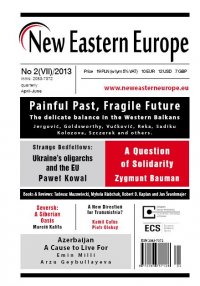 New Eastern Europe is a new Quarterly magazine dedicated to Central and Eastern European affairs. The magazine is the sister edition of the Polish version Nowa Europa Wschodnia, which has been on the Polish market since 2008. Countries in particular focus in New Eastern Europe include Russia, Ukraine, Belarus, Moldova, as well the Caucasus region - Georgia, Armenia, Azerbaijan, Chechnya, etc.

Articles in New Eastern Europe focus on a wide range of social, political and cultural issues facing this region. The journal includes original opinion and analytical texts; historical accounts; reports from correspondents in the countries with full colour photos; and reviews of books, music and film about and emerging from Eastern Europe.

A Word in Search of Flesh: Solidarity Zygmunt Bauman

Balkan Poets For Otto and Alexandra

The Merchants of Europe Miljenko Jergović

Rubbish and not much else

Russia is too far, Belgrade is too weak

The Middle East in Eastern Europe

The future struggle with the past

Towards a Balkan Benelux

Political will, or a lack thereof

Kosovo, a new course of action?

A Pact with the Oligarchs Paweł Kowal