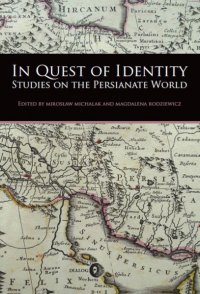 In Quest of Identity. Studies on the Persianate World

Stability and changeability of identities, especially in the context of their disappearance and revival, is one of the leitmotifs of the current publication, which is a fruit of a collective effort of scholars who represent diverse areas of the humanities and varied approaches to the issue of identity in the lands occupied by the Persian-language civilization. Treating the issue of identity in an interdisciplinary manner made it possible to present it from a variety of standpoints, consequently yielding a complex picture of the matter. Moreover, as it often happens when an interest in a certain research problem is shared by many specialists, new perspectives were discovered. The effect of synergy that emerged during the preparation of this publication undoubtedly adds to its quality. In addition, whereas sociologists and psychologists have long conducted research on identity or identities, an approach to the subject made from the point of view of Oriental Studies is to some extent an innovation and constitutes an interesting challenge.

Introduction
The Role of the King of Kings: An Interpretation in Historiography - Dariush Borbor
Kasravi – Was He Truly the Integrative Nationalist of Iran? - Stanisław A. Jaśkowski
A Glance at New Persian Translations of the Middle Persian Texts - Mateusz M. Kłagisz
Who is a Madame? - Anna Krasnowolska
A Lost Identity: Iranians as Seafarers and Explorers - Mirosław Michalak
The National Identity of Iranian Jews, As Manifested in their Intellectual & Judeo-Persian Contributions - Nahid Pirnazar
Blasphemers or Mystics? Reflection over the Nature of Revelation in Contemporary Iran - Magdalena Rodziewicz
Indigenous versus International? The Role of “Preislamic” Identity and Shici Islam in the Clashes of the Bāwandid Kingdom with the Nizārī Ismācīlīs in Northern Iran - Miklós Sárközy
Razi’s Egalitarian Idea - Reza Shomali
Rūmī, Balkhī, Mevlevī: The Ambiguities of Identity in the Poetry of Jalāl al-Dīn Muh.ammad (1207-1272 CE) - Rafal Stepien
How the Characters Speak for Themselves: Colloquial Language as a Mean of Expressing Identity in Čerāqhā rā man xāmuš mikonam, a Novel by Zoyā Pirzād - Katarzyna Wąsala
List of Contributors
Index