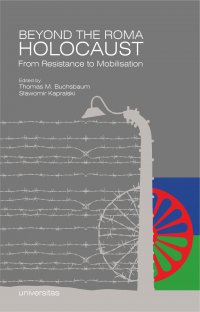 Beyond the Roma Holocaust. From Resistance to Mobilisation

The present publication is based upon the international symposium entitled "Beyond the Roma Holocaust: From Resistance to Mobilisation", held in Cracow on 21 and 22 October 2016 on the occasion of the 75th anniversary of the deportation of half of all Austrian Roma and Sinti to the Nazi Ghetto of Łódź, and after the liquidation of the so-called Zigeunerlager Litzmannstadt the subsequent murder of some 4300 of them in so-called gas-vans at the Nazi extermination camp Kulmhof at Chełmno nad Nerem.

The authors of this publication hailing from various countries and backgrounds reflect upon the nature and origins of the Roma genocide in the context of the contemporary situation of Roma communities in Europe. They discuss the fate of Roma during the Nazi terror in terms of their resistance and strategies of survival and thus go beyond the paradigm of victimisation. The authors debate the immediate and long-term consequences of the Holocaust for the process of the political mobilisation of the European Roma, the impact of the historical experiences of Roma communities on their contemporary identities, and the role of historical memory in forming the Roma movement.

"The porrajmos cannot be altered retroactively, but probably can serve as a useful point of reference and departure in order to look to the future of Roma in our common Europe" writes one of the co-editors, Thomas M. Buchsbaum.

TABLE OF CONTENTS
Preface
Preface by the Austrian Ambassador, Dr. Thomas M. Buchsbaum
Preface by Professor Sławomir Kapralski
Introduction
Adam Bodnar, Holocaust of Roma people: Tragedy Still to Remember
Romani Rose, The Civil Rights Movement of German Sinti and Roma and the Struggle for Recognition
In the Shadow of Genocide – the post-Holocaust situation of Roma communities
Gerhard Baumgartner, Identifying the Roma and Sinti victims forcefully deported in autumn 1941 to the „Zigeunerlager Litzmannstadt“
Oliver von Mengersen, The impact of the Holocaust on the Sinti communities in post-war Germany
Elena Marushiakova and Vesselin Popov, Rethinking Roma Holocaust: victims or/and victors
Andrej Kotljarchuk, Invisible Victims: The Cold War and Representation of the Roma Genocide in Soviet Feature Films, Teleplays and Theater Performances
Stanislaw Sorys, The role of the regional government in the process of commemoration of Roma extermination in Poland
Danijel Vojak, Roma Holocaust in Croatia: from marginalisation to formal recognition and commemoration
Roma political mobilisation: memory and identity
Thomas Acton, The European Forgettory: The deconstruction of forgetfulness: The historian's contribution to breaking the cycles of history
Konstanty Gebert, Shoah and Porrajmos: closely connected, yet best kept separate
Kimmo Granqvist, Nordic Roma history, academic anti-Gypsyism and scholarly work on anti-Gypsyism and Roma Holocaust – Prof.
Małgorzata Kołaczek, Romani movement in the EU: with the Roma or for the Roma?
Anna Mirga-Kruszelnicka, The future of Romani politics: What lies ahead?
Márton Rövid, Bordering, mobility, citizenship: Preliminary notes on the impact of the ‘refugee crisis’ on ‘Roma’ representations
Appendix
Consolidated speeches by the Austrian Ambassador to Poland, dr. Thomas M. Buchsbaum, during the commemorative celebrations of the 75th anniversary of the deportation of Austrian Roma to Łódź and of the erection of the memorial stone to commemorate the murdered Roma at the memorial in Las Rzuchowski at Chełmno nad Nerem on 2nd and 3rd August 2016
Biographies of the Autors